Alpha BRAIN may help you remember names and places, focus on complex tasks, and improve your mental speed in response to stimuli. Whether it is a work project, a social gathering, or an athletic performance, taking Alpha BRAIN is like another gear for your brain.

If you want your brain to work better, you need to concentrate on two things: getting it to make more alpha waves and supporting the production of neurotransmitters, chemicals that relay information in and from the brain. We formulated Alpha BRAIN® with both goals in mind.

With its trademarked ingredient blends, Alpha BRAIN® helps build an environment in which the brain can operate on all cylinders, promoting lasting mental clarity.

Being in a flow state is associated with greater activity of alpha brain waves. Research actually shows that the brain is better organized and more calm and focused when alpha waves are firing high. The Onnit Flow Blend™ provides amino acids and other plant compounds that promote alpha brain wave production and optimal brain cell function.

This formula is further supported by Cat’s Claw extract, which comes from the bark of an Amazon rainforest vine. Cat’s Claw is known to promote cellular integrity.

Acetylcholine is one of the body’s most important neurotransmitters, as it controls nerves, muscle cells, and hormonal glands. The compounds in the Onnit Focus Blend ™help the body make acetylcholine, sustain optimal levels, and encourage nerve cells to receive it. This formula gains additional support from vitamin B6, which has been shown to play an important role in neurotransmitter production.

To top it all off, the Onnit Fuel Blend™ has been formulated with the goal of maintaining a healthy brain environment, further optimizing neural communication. 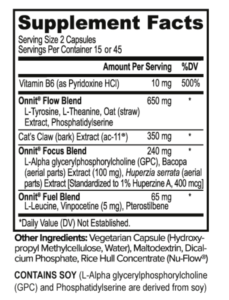 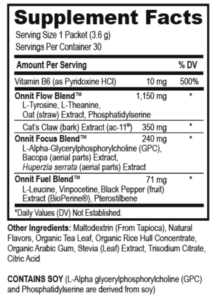